This year we’ve added 75,000 documents and 27 million sequences, making GQ-Pat even bigger than before.

To put this accomplishment in perspective, when the Human Genome Project formally began in 1990, there were fewer than 40,000 sequences in GenBank, before being transferred from Stanford to the newly created National Center for Biotechnology Information (NCBI).

As of this month, according to the NCBI’s GenBank Statistics page, there are 201 million nucleotide sequences in GenBank/EMBL/DDBJ consortium, the world’s gold standard for sequence databases.* 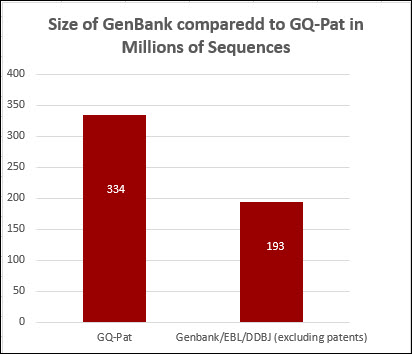 Not only does GQ-Pat have more sequences than GenBank, these sequences help searchers in other ways as well:

We’re so pleased that more and more researchers are turning to GQ-Pat to search sequences for a huge variety of life science related projects. When it comes to researching or protecting intellectual property, the quality of the results are often only as good as the size of the database they come from. That’s why we’re dedicated to maintaining the world’s largest. Of course, we’re also adding rich annotations and making sure updates are added on a weekly basis.

If you’ve never tried it, and you’re interested in searching our 371 million sequence (and growing) database for yourself, there’s never been a better time to get in touch about a free trial. 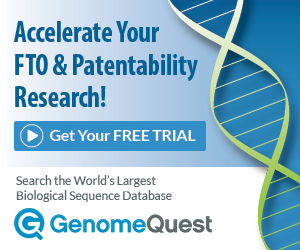