Where does your team find inspiration for new ideas, projects, and opportunities? Journals, publications, conferences, and other research are common answers, but if that’s where your sources end, you’re missing one incredibly productive source – patents.

Turns out, if you’re in R&D, you probably already knew that. Our team recently conducted a survey with a large group of researchers (over 1,000 people) working in R&D in pharma, biotech, and agrochemical research companies. Our goal was to learn more about how they use patent information in their research process, and measure patent information’s importance to them. The results surprised us, but encourage us to continue building patent research tools for life science R&D teams that make searching easier and the results more understandable.

Prior to conducting the survey, we didn’t expect researchers to be doing a lot of patent searching. We thought that maybe an occasional freedom to operate (FTO) search would be performed, perhaps some checks on their own patents, etc. It turns out we were wrong.

Like so many other scientific disciplines, the life-sciences have become very information-intensive. My favorite example is that a single run on a modern Next Generation Sequencing (NGS) machine (currently around $1,000) now produces more (and better) data overnight than the entire $3-billion Human Genome Project did over the course of its 13-year existence. As a result, research is becoming much more data-driven, and innovation itself is shifting from the lab bench to the keyboard.

This shift is clearly illustrated by the number of life science applications being filed. The chart below shows how, over the last decade, the number of applications has been consistently growing. There are now about 450k new documents every year. This comes down to a healthy compound annual growth rate (CAGR) of about 4% [source: GenomeQuest and LifeQuest; note that applications filed in 2015 are still coming in, so the number will go up].

There is no doubt in my mind that as the number of life-science patents continues to grow, that the value (and necessity) of searching patents will grow as well. You don’t have to take my word for it though, our survey confirmed that theory: About 75% of the respondents said that their company actively encourages them to look at patents. In addition, a staggering 90% said that patent searching was also important to them personally. This should not be a big surprise as life science companies critically depend on IP for market exclusivity and to protect their revenue streams.

What are researchers searching patents for? It turns out that life science companies think their R&D employees should search them for everything: general knowledge, competitive intelligence, the technology landscape, patentability, prior art, and FTO.

The employees themselves see this slightly differently and have a clear preference for patentability, technology landscape, and competitive intelligence. In other words, they are really interested in what everybody else in their field is doing and care a little bit less about things they might perceive as the task of the legal team and their professional searchers. What we concluded from that is researchers are using patents as a source of inspiration for their research and to compare their progress with their peers.

How often are researchers searching patents? A lot, it turns out. Almost 90% of the respondents did at least one patent search in the last year, while 30% did more than 10 searches in that same time period. 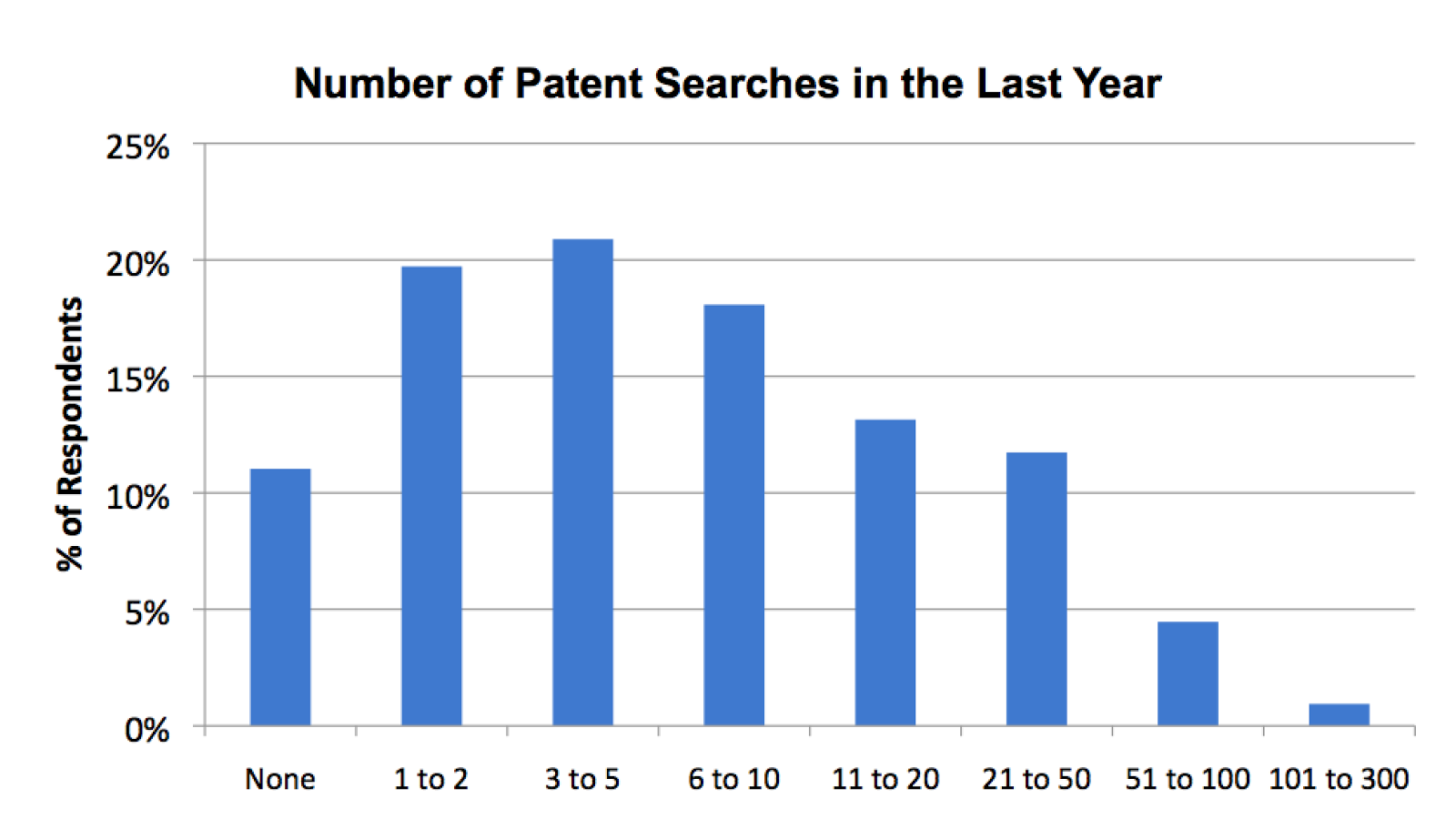 On average, inventors, people that have published at least one patent, search three times as much than non-inventors do (data not shown here). Indeed, those who search more frequently also believe they search much more than their colleagues.

Furthermore, two-thirds of the respondents indicated that they are not satisfied with their current search tools, and would definitely try something new.

What did we conclude from the resulting data? Researchers are performing more patent searches than we expected, and they think better tools could help them do it more efficiently and effectively. This excites us here in the GQ Life Sciences office, and encourages us to keep pushing LifeQuest forward until everyone that needs to search patents using natural language is able to do so.